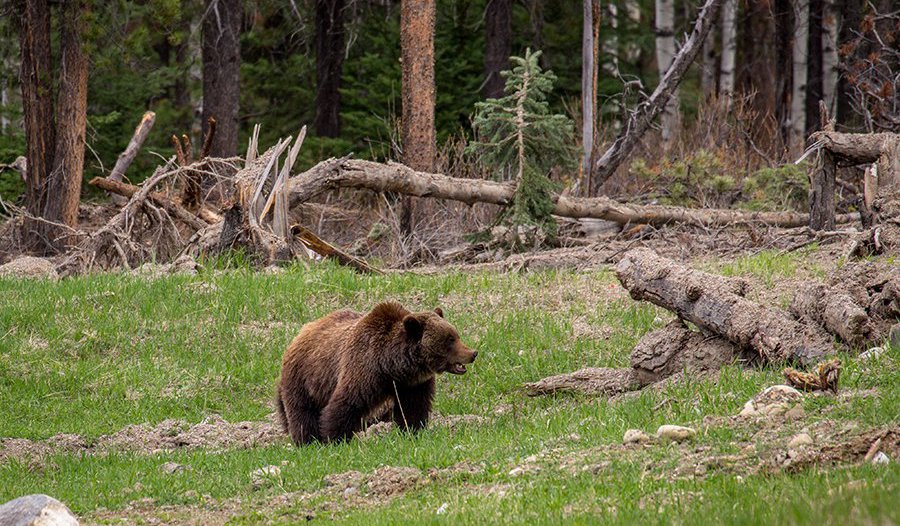 As the biggest national park in the Canadian Rockies, Jasper is famous for its wildlife. Bears in particular get a lot of attention, and it’s no wonder. Both black bears and grizzly bears live in the region and they’re impressive creatures to see. But they’re also wild.

If you want to see a bear in Jasper, or if you happen to spy one while in the park, always follow these essential wildlife watching rules. They’ll help keep both you and the bears safe. For the best chances of spotting wildlife while also ensuring you’re following regulations, we recommend going on one of the excellent daily wildlife tours.

Remember these animals are wild

Even if an animal appears unconcerned by your presence, this is not an invitation to get comfortable. This is not a zoo and these animals are unpredictable and potentially dangerous.

Do not approach or entice wildlife. Use binoculars or a telephoto lens instead. Remain at least 100 metres away from bears (as well as cougars and wolves). Also, stay at least 30 metres (3 bus lengths) away from elk, deer, sheep, goats and moose.

Spring is when bears are at their most dangerous

Though you should never mess with bears, you should be extra cautious in springtime. After a long winter hibernation, they wake up hungry. If it happens to be a female, she might have cubs somewhere in the woods with her, making her extra protective and potentially aggressive. Note that spring is also when female elk are at their most unpredictable and dangerous. May/June is calving season; meanwhile males are especially dangerous during the September/October rut.

Never entice a bear (or any animal) with food. It is not only dangerous for you, it is dangerous for the animal because it disrupts the bear’s normal diet and can increase dependency.

Also never leave stuff out and unattended that could attract a bear. These include: coolers, food scraps, dishwater, dirty dishes or barbecues, empty bottles or wrappers, toothpaste, soap or other toiletries, or pet food dishes(full or empty.

If a bear becomes 'habituated' and loses its natural fear of humans, it is likely to become a ‘problem’ bear. These bears seek out human gathering places because they've learned to associate them with food and garbage to eat. Over time they become increasingly aggressive and usually end up having to be removed or destroyed because of the threat they pose to public safety. It is very difficult, and often impossible, to undo habituation. The only real solution is prevention.

Be aware of your surroundings at all times

Always be on the lookout for animals or signs of their presence. Carefully supervise children whenever outdoors. Drive with care and watch out for bears near the road (be especially cautious at dusk and dawn, when many animals are most active, and visibility is poor.)

If you see a bear by the road:

Slow down. It could run out into your path at any time. Warn other motorists by flashing your hazard lights. A bear may run onto the road, especially if there are crowds of people around, approaching too closely. In the past 10 years, 125 bears have been killed on roads in the mountain national parks. Consider not stopping, but if you do wish to stop, pull safely out of traffic. Remain in your vehicle, take a picture and then move on after a few minutes.

If you are not in a vehicle:

To reduce your risk of a surprise encounter on the trails, make noise as you hike. Clap, sing or yell to announce your presence, especially where a bear might not otherwise smell, hear or see you coming. (Bear bells are not very effective.) Travel in groups, on established trails, and during daylight hours.

Minimize odours by properly storing food and other attractants. Leave the area if you see a bear or fresh tracks or bear droppings. If you come across a large dead animal, a bear may be nearby. Always hike with bear spray easily accessible.

If you encounter a bear, stay calm. If it rears on its hind legs and waves its nose about, it is trying to identify you. Remain still and talk calmly so that it knows you are human and not a prey animal. Bears may also bluff charge: run toward you and turn away at the last moment. A scream or sudden movement may trigger an attack.

Pick up children, stay in a group. Back away slowly, don’t run. Leave the area. If this is impossible, wait until the bear leaves; make sure it has an escape route.